I woke up with the word “reentry” on my mind.
What did it mean?
What was I supposed to do with it?

A few months ago, I had the rich honor of sitting with Mary—along with her daughter; my dear friend Monica—a few days before her death. Mary was ninety-six years old and ready to go back to spirit side. Her husband died eleven years earlier. She had raised two wonderful children. She was blessed with grandchildren and friends and an enormous amount of faith. A few days before she died in Monica’s arms—in the home she had shared with her husband—we all prayed together. It was profound and peace-filled and poignant—ripe with the awareness of the end of one kind of life as she made her reentry to the spirit side.

In the past few months, I’ve been to more viewings and funerals than ever before. As we age, the fragility of human life—the awareness that we’re not invincible; that there is a “hard stop” to this life and a reentry into a different life—comes more and more into our frame of awareness.

Sitting in my quiet time with God this morning, I thought about reentry as rebirth—not something we do only when we move to the spirit side but rather all the times we have to, or choose to, start new even when we’re not new.

• reentry into believing in the value of ourselves—even when we don’t think others see our worth
• reentry into living fully—choosing to actually be “present”; sometimes after having lived a shadow life for a very long time
• reentry into loving—opening a heart closed by loss or betrayal; taking a chance in spite of past suffering, in spite of how we’ve been hurt

Yesterday morning, sitting with people who are part of my faith community, Sue’s topic was forgiveness and grace. This is what I offered as my reflection at the end of her message: “To forgive is very different than to forget. Forgiveness allows us to move forward—perhaps with caution, but to move instead of being stuck. But, forgiveness does not require us to forget. By not forgetting we keep the lessons learned, and the awareness of how not to treat others. In that, we find grace.”

Sometimes, in the reentry process, we get lost in the maze—trying to figure out how to get to where we know we want to be but going around and around until we finally find our way.

And, sometimes, when our spirit is ready to soar free again, we pack up our bags of guilt, sadness, disbelief, pain, abandonment, and fear. We put all of them into one space and grieve the losses. We honor them as part of who we are. We accept the “less than perfect” past. We take a few steps forward, then maybe one back, but we move ahead. We choose to go on. We choose to hear the song again. We choose life. We choose reentry—not a replication of a past that can’t be cloned or a reentry that is only on the surface—a reentry that invites us to live into our best selves.

Amazing grace
how sweet the sound that saved a wretch like me.
I once was lost
but now am found
was blind but now I see. 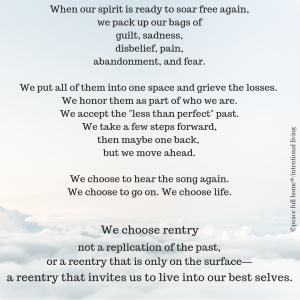 Peace. Intention. Joy
I’m on a mission to change our world! And, you’re here. So, will you help me?

But, first, let me introduce myself.

Hi! I’m Kay—writer, teacher, seeker. I’m also a mother, grandmother, wife, friend, book lover, tree-hugger and interior designer. I write for readers who want to live into their best lives. It doesn’t matter if you’re eighteen or eighty-one; it’s never too early, or late, to transform; to intentionally create a peace-full reality.

Peace Full Home wasn’t my brainchild—that was all God. In 2013, as I sat outside on a beautiful Saturday morning, I heard the words, “peaceful home”. I went inside, pulled up the name on my Mac but, of course, “peacefulhome.com” was taken. I let it go. The next morning, I heard it again, but this time it was clearer: Peace Full Home. I thought, “okay, God, I’ll check that out, but I’m pretty sure someone owns that name too.” I was wrong. That’s how I got here, talking to you!

I’m striving for conscious existence, say “Thank You God” each morning as I get out of bed, and have learned that listening to your inner voice—instead of the clanging gongs all around us—can change everything. Intentional living can change everything. That’s what I want for you too. You deserve to live your best life….really!

I believe in:
•saying “yes”, instead of “no”, to life
•integration of body + mind + spirit
•truth + speaking with passion
•vulnerability + sharing of real stories
•a less is more philosophy

I hope to share experiences that you can relate to, and insights that help you create your best life, so that you can walk with joy and grace. I want you to recognize that what you’re feeling, others experience too. I’d like to challenge you to see things from a new perspective. And, I want to listen to you! Share your stories, ask questions, be vulnerable. It’s all okay.